skip to main | skip to sidebar

Almost a dozen Crescent Hill folks gathered Saturday at Heine Brothers to talk about Guatemala mission. Atop the list of topics for discussion was the possible October 7-15 visit by five Guatemalan partners. The group talked how the five Estoreño Presbytery reps slated to visit had obtained Guatemalan passports, with some assistance from Amanda in Antigua, and Crescent Hill had given letters of support/invitation to Amanda – from PC(USA)’s World Mission’s Maria Arroyo, from Mid-KY Presbytery’s Betty Meadows, and from Pastor Jane. Amanda is slated to be in the United States for a week or two, and then will carry those letters back to Guatemala, to give to the reps when they travel to Guatemala City for their visa application appointment (which Amanda will also attend) later this summer. Amanda is also to double-check the visa application fees and procedures. She will be in touch with both Crescent Hill and Estoreño folks, so that Crescent Hill might send money in advance for that and Estoreño folks might start making arrangements. The Crescent Hill group authorized sending the presbytery money very soon as reimbursement for invoiced costs associated with obtaining passports (fees, travel, lodging).

The group talked about the yard sale to raise funds for the trip, slated for the Crescent Hill Education building on the weekend of Saturday, August 6. Soni outlined some tasks associated with the yard sale, and folks attending volunteered to help lead various work groups (Doug and Perry for Publicity, Claudia and Lowell for Pre-sale, Ana for Logistics, Carlos and Nora for Clean-up, with no one yet signed for same-day Check-out). Other people who might help lead work groups were discussed. There was a fair amount of discussion about strategies of publicizing the yard sale, pick-up, and related issues. Soni’s to-do list about the yard sale will be distributed, and Soni will write an article for the July newsletter (to follow up on the article in the June newsletter).

The group moved outside and Ana and Carlos called Pastor Gerardo, with whom Carlos talked about at some length. They talked about logistics for the trip, about the Guatemalan Presbyterian church’s General Assembly, and about prayer concerns: the neighboring Izabal Presbytery (south of the lake), the Estoreño Presbytery, and Gerardo, who has taken on two additional responsibilities for the Guatemalan church, including serving on a committee for the Walton Fund.

Afterwards, the group talked about a possible visit to the immigrant detention center at the Boone County Jail in northern Kentucky. Information about this visit was discussed, and Pastor Jane, Claudia, Cora, Diana, Doug, Perry, Soni, and possibly Stephanie have expressed interest in going.

The group also talked about issues raised in letters from PC(USA) mission co-workers. First, in a letter and blog entry Philip Beisswenger talked about the discussion at the Guatemalan GA meeting in late May (which Gerardo did not bring up on the phone) where church leaders said we’d agree to disagree. They were not fans of the policy change, but they agreed to stay in relationship with the PC(USA). (For more information, see Philip’s blog entry at: http://pbpres.wordpress.com/2011/05/27/wrap-up-of-ienpg-synod-meeting.)

Second, a couple of recent communications dealt with incident of violence, including the murder of a female Q’eqchi’ activist in the neighboring Polocic Valley. PC(USA) mission co-worker Karla Koll, who has spoken at Crescent Hill and with mission team members in Guatemala City, dealt with this more broadly in another blog post, at: http://missioncrossroads.ning.com/profiles/blogs/some-thoughts-on-violence-in

Finally, Carlos asked Gerardo for the travelers to think about what they wanted to do while in Kentuckiana. Gerardo said they were interested in what Crescent Hill folks wanted to do with them while here. Something else Gerardo said suggested meeting with some church leaders at the Presbyterian Center might be in order. The group also discussed other ideas: a church fellowship event like going to Hubers, a trip to Bernheim Forest or Mammoth Caves, visits to the presbytery office or seminary, as well as the possibility of \Gerardo (or Raul Contreras) preaching, of them going to a Sunday school class or being part of a Food for Thought lunch, or an EFL meal. 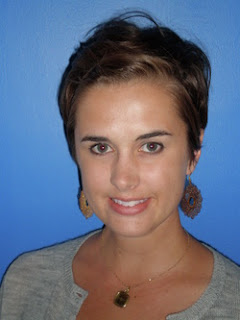 In an e-mail exchange last week with Louisville immigration lawyer Becca O’Neill (pictured above right), Crescent Hill folks interested in participating in the Friday, July 15 visit to the Boone County (KY) immigration detention center learned more details. Many detainees speak only Spanish, and for this the lawyers need volunteer interviewers who speak Spanish fluently. Volunteers who are fluent in Spanish, therefore, are almost never turned away. French and Arabic are also popular languages, and sometimes detainees also speak other languages. Some detainees speak English, and volunteers who speak English only are assigned to interview them, as well as to provide clerical help during the visit. There is a cap on the number of English-speaking volunteers the program needs for each visit, and so folks interested in doing this should volunteer early. There is no room for non-interviewer “observers.”

Volunteers must participated in a training the night before a visit, in addition to being at the jail no later than 7:45 a.m. Friday morning. Most Crescent Hill folks who participate in the Friday, July 15 visit will probably go to the 6:15 p.m.-8:00 p.m. Thursday, July 14 training. Another option is to participate in the training this Thursday, June 16, which is the night before Friday, June 17 visit, which Mid-KY Presbytery staffer Tony Aja is going to go on. Both trainings are in Room 171 of the University of Louisville law school building. 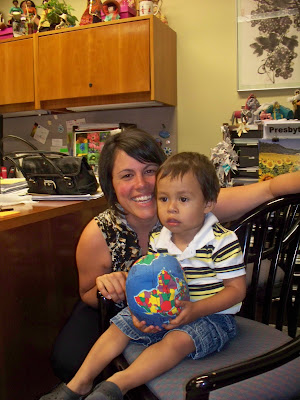 Amanda, Maria Arroyo, and others met at the Presbyterian Center World Mission offices, and Amanda received Maria's notarized letters endorsing the visit from each of the Estoreño Presbytery reps. Afterwards, Debby Vial, and Amanda - with Amanda's child in tow - met briefly and passed on letters from Pastor Jane and General Presbyter Betty. Perry will mail replacement letters from Betty to Amanda in Pennsylvania, where she is going to be with her father, who is ill, after she receives even better-looking versions. Amanda suggested that - whether Crescent HIll sends money to the presbytery now for the passport expenses or combines it with some passport expense reimbursement - the church definitely send the money the five will need to make visa application appointments and to apply for the visas in advance of the next trip to Guatemala City- as they will need to pay these not small amounts in advance. Amanda said she would double check the amounts upon her return to Guatemala. Amanda suggested sending visa application trip travel expenses money later, closer to whenever they and Amanda go in July or August, to make sure the money is still available - not spent - at the time they go. 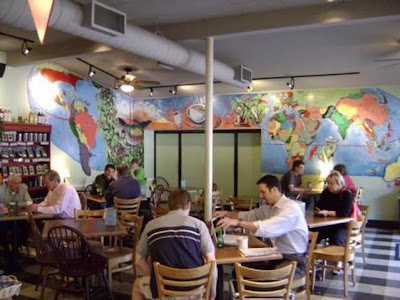 Crescent Hill folks interested in the Guatemala mission partnership will meet at 9:30 a.m. this coming Saturday, June 11, at Heine Brothers on Chenoweth Lane, to talk about the probably fall Kentuckiana visit by our Guatemalan partners and fund-raising for that.
Posted by Perry at 5:54 PM No comments: 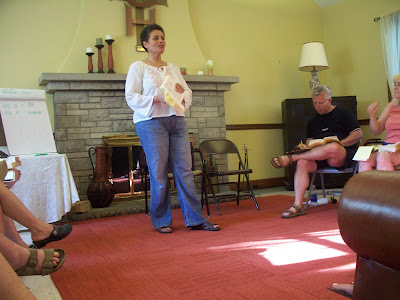 Language activities were in some flux early this month. The Spanish class at Crescent Hill church started up again, with Ada at the helm. Students were mainly the same as the spring term, but two new students - Anne and Clara - joined the class. Summertime Spanish-language worship, dinner, and Bible study continued on Saturday evenings at James Lees. The May-June English as a foreign language classes, with dinner, were to continue two more weeks into June, with this coming week being Crescent Hill's final week cooking. Next week will see Crescent Hill's Ana's final week as child care coordinator. And - after a week off - the final class of Crescent Hill's Sunday morning Spanish-language Sunday school, which has focused on the Book of Job, took place this past weekend. Half a dozen of the class's regular attenders were there to reflect on passages to the promised land and the meaning of war and peace yesterday and today, in the Middle East and elsewhere. Pictured above and below are the inaugural summer Spanish class. 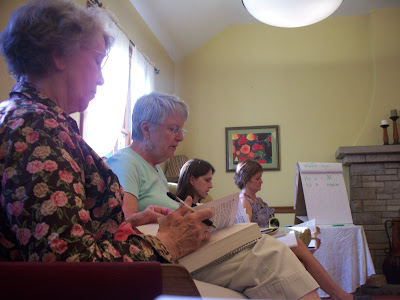 Letters of invitation and endorsement are coming together, which are a crucial part of efforts to win U.S. visas for the five Estoreño Presbytery representatives slated to visit Kentuckiana this fall. Carlos and Perry talked with Pastor Gerardo during the Guatemalan national church's General Assembly in late May, and Perry received an e-mail confirming the names of those slated to visit. Then, before leaving town, Pastor Jane printed out and signed letters for each of the five on CHPC letterhead. Mid-Kentucky Presbytery General Presbyter Betty Meadows has prepared letters of endorsement on presbytery letterhead, which she will deliver to us this coming week. And Maria Arroyo has signed, and had notarized, letters of endorsement from her and the national church. Amanda is slated to be in Kentuckiana this month and to retrieve the letters, which she is to take back with her and take with them when she goes with the five to their visa appointments. Amanda's schedule has apparently become complex, but this should all work out soon.